Brisket is beefcut from the lower section of the breast or upper chest of beef. It is one of the nine beef basic cuts. The brisket can be cut and cooked in a variety of ways. It is usually served as a barbecue. It consists of sodium, fat, potassium, and carbohydrates.

The brisket can be cut into slices, or you can chop it. The brisket muscles include the deep pectorals and superficial and external intercostals. It should be cooked more slowly over low heat so that the meat can become a tenderer. 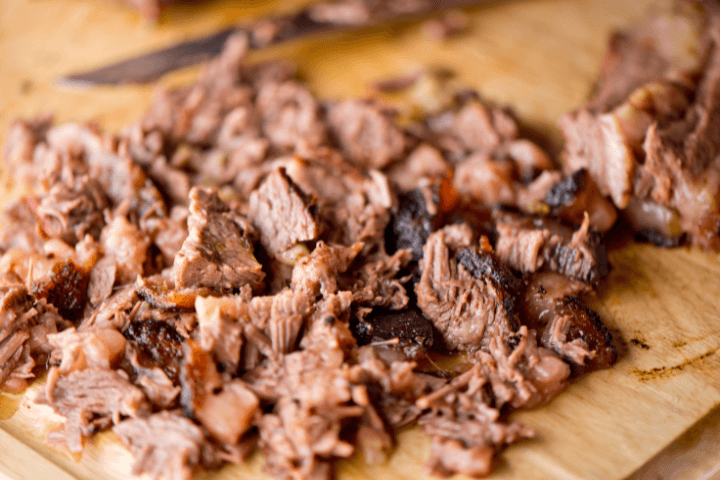 Chopped brisket has a different texture that can be eaten as an appetizer or main dish. It is famous for burgers and sandwiches. Brisket is quite a large cut of meat. A whole brisket can weigh up to 20 pounds. You can chop the meat into large are small chunks. It is advised to add an acidic ingredient to chopped brisket. It will help balance fat and give extra flavor to the meat.

How To Chop Brisket?

Sliced brisket is the same as chopped, but it is sliced very thin to a consistent thickness to get nice even slices. Sliced brisket is used to eat as a main and formal dish with gravy. When you cook it slowly, you will give more time for connective tissues to break down, and the slices will be delicious to eat. The slicing of brisket is a little tricky compared with chopping.

How To Slice Brisket?

Slice brisket by cutting across the grain of the meat. Use a sharp knife and slice it thinly against the grain. Otherwise, the meat will be chewier. Cut against the grain at 90 degrees. This will make the bite more tender and flavorful.

For slicing, start from the thicker end of the meat. Then begin slicing down until you have cut the whole piece of brisket.

How to Trim Brisket?

If you have cooked well the brisket, no matter if it is chopped or sliced, it will taste wonderful. However, both are different in texture, but it will depend on your cooking techniques.

Reach out to us if you need any help regarding cutting.

Our team consist of chefs that have worked for years in famous restaurants of Texas.